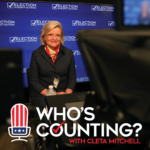 As chair of the Wisconsin State Assembly’s Committee on Campaigns and Elections, Republican State Assemblywoman Janet Brantjen has held hearings and collected documentary evidence about the corruption by some of the state’s Democrat mayors and election officials who used private money — “Zuck Bucks” — to turn election offices into campaign machines for Democrats. Rep. Brantjen fearlessly uncovered the liberal infrastructure in her state, and tells Cleta that the story of the manipulation of voting in the 2020 election “is still unraveling.”

In addition to exposing the interference of liberal anti-election integrity advocacy groups like the Center for Tech and Civic Life and the Center for Election Innovation and Research and their hiring of cynically named partisan “vote navigators,” Brantjen has also researched and conducted hearings into grossly inaccurate voter rolls and other election integrity problems that are an open invitation to fraud in Wisconsin.

This report by the Wisconsin Spotlight and another at The American Conservative utilizes Rep. Brantjen’s investigative work to detail the flow of corruption of Zuck Bucks and other liberal groups through Wisconsin’s election agencies in 2020.