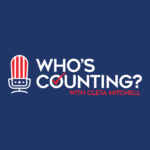 As part of Virginia Week in the Election Integrity Network, join Cleta today as she talks with Shelley Oberlander, Chairman of the Loudon County, Virginia Election Integrity Task Force.  Loudon County has emerged as ground zero for parents wresting control over their local school boards and their children’s education.  Shelley describes a similar effort of citizens in Loudon County engaging at the local election office.  Shelley is a homeschool mom who sets a great example of citizen engagement to protect election integrity.